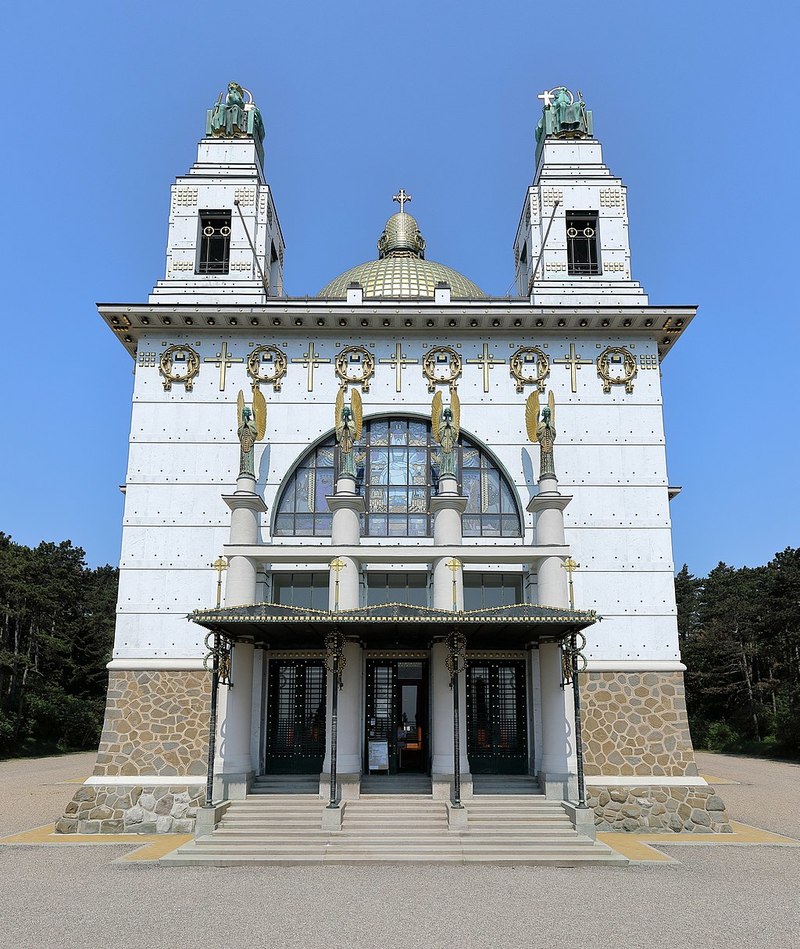 St. Leopold's Church at the Steinhof 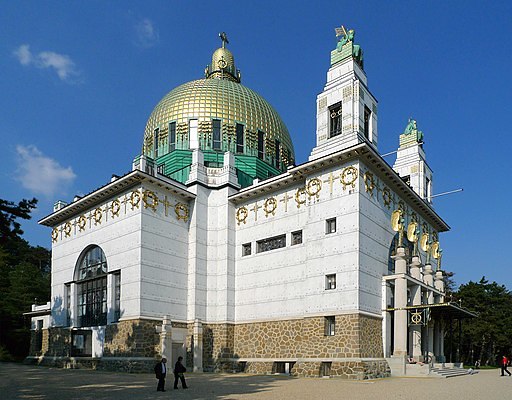 St. Leopold's Church or the Church at the Steinhof was built from 1904 to 1907, based on designs by Otto Wagner and is considered as one of the most important buildings of the Viennese Art Nouveau. The Roman Catholic church building is located on the premise of the "social medicine centre Baumgartner Höhe" in the 14th district of Vienna Penzing; the centre has been known as the Penzing Clinic since 2020.

„St. Leopold's Church“ or better known as the Church at Steinhof (or also Otto-Wagner-Church at the Steinhof) was built between 1904 and 1907 as part of the establishment of the Lower Austrian State Sanatorium and Nursing Home for the Nervous and Mentally Ill at the Steinhof (today Otto-Wagner-Spital). The architect Otto Wagner, commissioned with the planning, had to take into account that it was an institution church for mentally ill patients and determined the special requirements for such a building in discussions with doctors and nursing staff. A doctor's room, toilets and emergency exits were planned, the church chairs were not allowed to have sharp corners, due to the risk of injury. The left and right rows of benches have five seats for the "quiet" patients, while the two middle rows of seats for the "restless" patients only have four seats, in order to facilitate access to individual people, if necessary. Wagner, for whom the hygienic aspects were always a major concern in his projects, designed a variant with holy water dripping down, instead of an ordinary holy water basin, in order to reduce the risk of infections. He designed the floor sloping towards the sanctuary, so that the patients in the back rows could see ahead better. The sloping floor with water drainage channels and the smoothly polished marble slabs on the walls, made it easier to clean the room. In addition, there were seperate entrances, not only for the nursing staff, but also for male and female patients, as segregation of the sexes was mandatory in Psychiatric hospitals at that time. There was no way of the cross, for fear that the sometimes violent depictions could trigger aggression. For lack of money, the lower church for Protestants and the synagogue for Jews were no longer realised. It is no longer known today, whether a heating system was not installed from the start or whether it was later dilapidated and therefore removed.

Archduke Franz Ferdinand of Austria opened the church on 8th October 1907. Between the Archduke, who was not very fond of Art Nouveau, and Otto Wagner, however, there were design differences from the outset, which is why Wagner was not mentioned in the opening speech and subsequently did not receive any more commissions from the imperial family. This gap, which arose from very different views on architecture and aesthetics, led the New free Press in their edition from 6th October 1907 to the question: „And isn't it a nice irony of fate that this is pretty much the first sensible large scale-Secessionist building in Vienna, was built for the insane?“.

The church has been owned by the City of Vienna since 1920, when Vienna became a federal state. Up until the 1990's, the building deteriorated more and more.

After about six years of extensive renovation work, the church reopened on 1st October 2006. Among other things, the dome was re-gilded using two klilogramme of gold leaf, the drum base was renewed with artificially patinated copper sheets and the facade, made of Carrara marble, was completely replaced. Windows, mosaics and figures were carefully cleaned and restored. The peoples' altar and ambo were rebuilt. Baumgartner Höhe, on which the church is located, owes its nickname „Lemoniberg“ to the golden dome, which now shines in new splendor and is visible from afar in the west of Vienna, reminiscent of half a lemon. The church received three new bells in 2007, manufactured by the Grassmayr Bell Foundry. The church is only open for church services and on Saturdays and Sundays for a fee. There are also guided tours on these days. 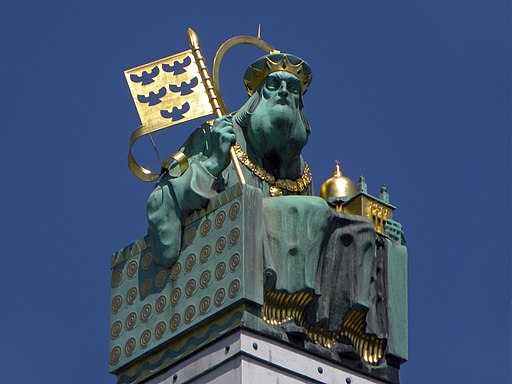 The Church at Steinhof, along with the Secession Building, is one of the main works of Art Nouveau in Vienna and shows design parallels to St. Charles Borromeo's Cemetery Church at Vienna's Central Cemetery, designed by Otto Wagner's student, Max Hegele, in 1899 and completed in 1910. One of the most distinctive features of the church is the golden dome, based on a Byzantine motif, which is supported by an internally clad construction. 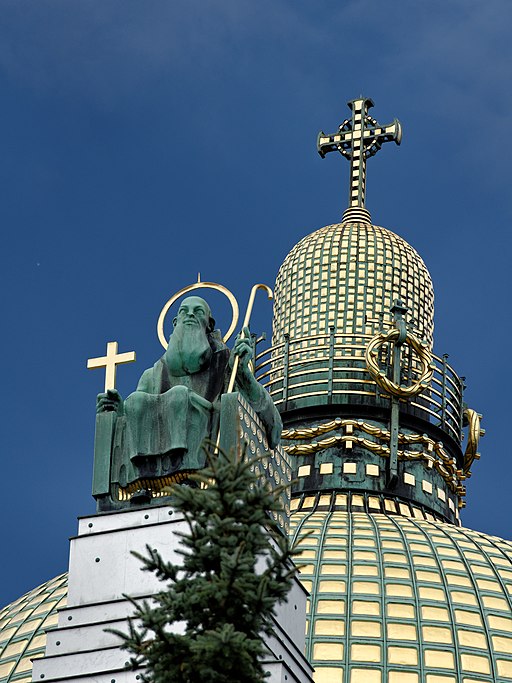 On the bell towers in front of it, St. Leopold, as the Patron Saint of Lower Austria and Vienna, is enthroned in the west, and the preacher Severin, in the east. The figures were created by Richard Luksch. Like the orientation of the church to the south, instead to the east, the depiction of the saints sitting, instead of standing, was also a break.

Under the cornice, there is a decorative strip with crosses and laurel wreaths, which are often incorporated into Otto-Wagner-buildings, such as the Austrian Postal Savings Bank or the cast-iron light rail railings. Above the main entrance, which was then used only for larger celebrations, there are four figures of angels, created by Othmar Schimkowitz, with bowed heads facing the church square. In a storm, the head of the second angel, from the right, had been torn off and soldered on again by the caretaker, albeit with his head held high. This fact was remedied during the renovation. 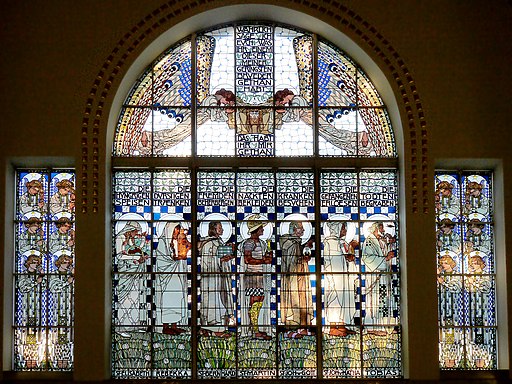 The layout of the stained glass window was designed by Otto Wagner in such a way that the church interior is flooded with daylight, as best as possible. The Tiffany style glass mosaic windows were designed by Koloman Moser and created by Leopold Forstner. The western window with the motto 'In truth I tell you, in so far as you did this to one of the least of these brothers of mine, you did it to me.' shows the bodily virtues. The angels, above the figures of saints, humbly hold the shroud of Jesus. The acolytes lower their heads, when viewed from bottom to top.

The eastern window with the motto 'Blessed are the merciful, they shall have mercy shown them' shows the spiritual virtues. The angels look up at a dove. The acolytes raise their heads.

The four windows in the dome show the Four Evangelists.

The large window, above the entrance, is covered by the organ on the inside, but is also directed outwards. It shows God, the Father, with outstretched hands over the six days of creation, He himself casts His gaze over the surrounding land, according to the Bible passage Genesis 1.31: God saw all He had made, and indeed it was very good. He is flanked by two angels as well as Adam and Eve. The work drawing was shown at the Kunstschau Vienna in 1908. 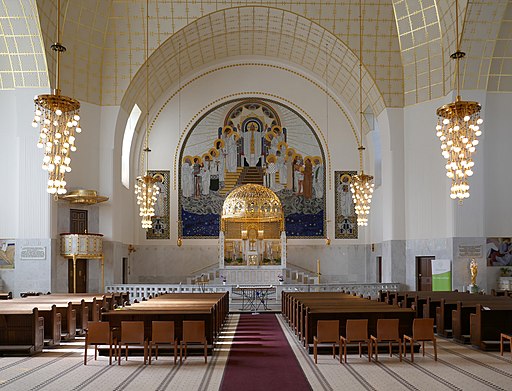 The altarpiece The Promise of Heaven was originally intended to be designed by Koloman Moser. Prelate Heinrich Swoboda, who had been entrusted with the supervision of the church by the Church, had already criticized and objected to the side windows. However, when Moser married, Ditha Mautner Markhof (1883–1969), on 1st July 1905 and converted to Protestantism, the commission was withdrawn from him, despite the intercession of Otto Wagner. Carl Ederer, who was already working on the commission at the same time, presented a draft that was similiar to that of Moser and was created in this form at Swoboda's insistence. Moser consequently accused Ederer of plagiarism, whereupon he filed a lawsuit at the urging of the other members of the Secession, from which Moser had already resigned in 1905. The process ended with a settlement and Moser's apology 'with the most vivid regret' about the 'ignorance of the circumstances'. When the church opened in 1907, only Ederer's draft on cardboard could be exhibited. With the agreement of Moser und Wagner, Remigius Geyling created a new design in 1910, but he abandoned the order in 1911 due to 'lack of suitability'. The execution of the 84,8 m2 large and four-ton mosaic was ultimately carried out by Leopold Forstner. 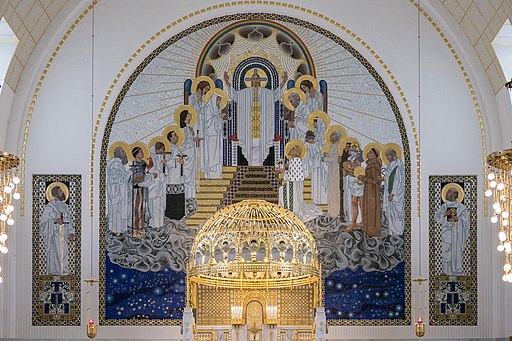 The altarpiece show the blessing Christ and two angels in the middle.

Stand on his right

Stand on his left

On the steps of the church, kneels St. Leopold in passing the Steinhof Church. The figures on the side of the altarpiece, depict Paul, the Apostle, with a sword and St. Peter with a key. The altar was made to designs by Otto Wagner. The mosaics of the side altars are by Rudolf Jettmar. The one on the right shows the Annunciation of Mary, the one on the left Archangel Gabriel. The confessionals were made by the Wiener Werkstätte. 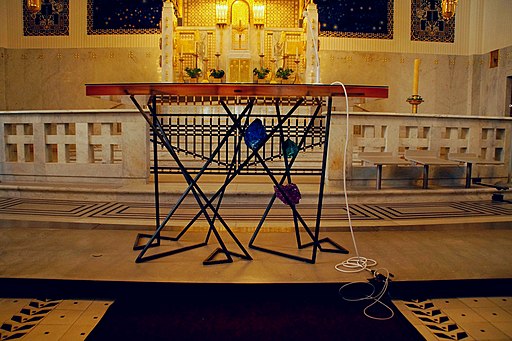 These two parts of the facility, which were necessary for the reopening in 2006, due to the liturgical reform in the Second Vatican Council, were designed by Dieter Henke and Marta Schreieck. Strict requirements of the Federal Monuments Office and the Archdiocese had to be observed, which, on the one hand, stipulated that the new objects should not be imitations of the existing Art Nouveau elements and that they must be removable again without damage. The two objects consist of a pedestal, made of terrazzo screed, on which a filigree construction, made of metal rods, support the synthetic resin panels of altar and ambo. At the altar, three glass stones, made of Swarovski glass, in the colours Red, Green and Blue, are integrated into the frame.

This construction resulted in liturgical problems, as an altar must be made of stone, on the one hand, and must stand inmovably in the church, on the other side. This was circumvented by the fact that the altar was not consecrated, but blessed, which is possible, since it does not contain any relics of a Saint and the church is not a parish church either.

For further information regarding opening times and opportunities of visit: https://www.stadt-wien.at/wien/kirchen/otto-wagner-kirche.html