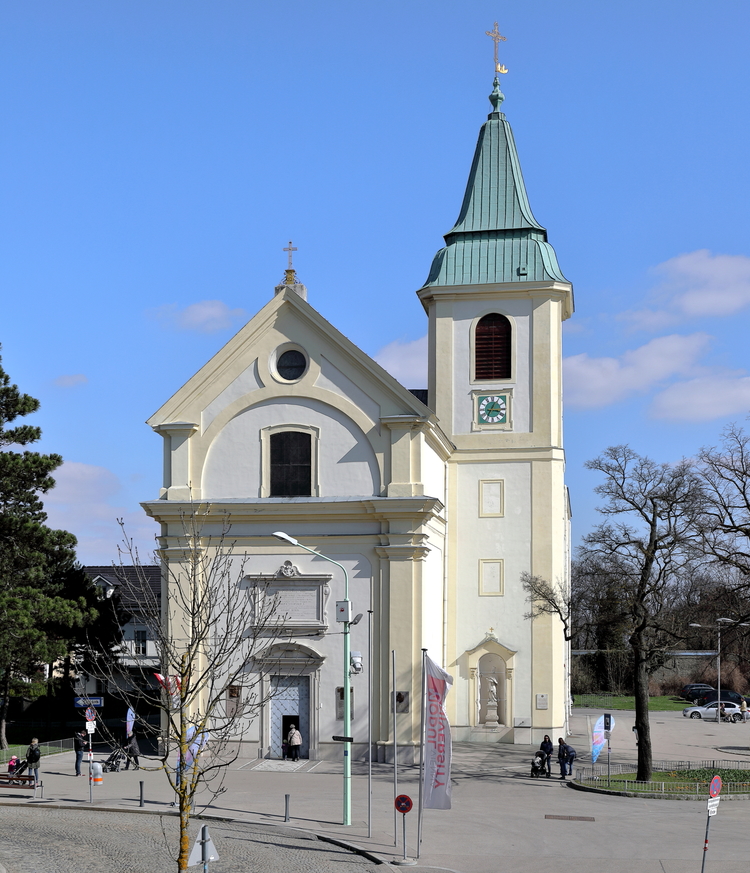 St. Joseph's Church on the Kahlenberg

The origins of the church go back to the Camaldolese monastery, which was previously located on the Kahlenberg. The Camaldolese were settled on the Kahlenberg at the time of Ferdinand II and began building the Hermitage there in 1628/29. The foundation stone for the church was laid on 10th August 1629, most of which was completed by 1639. In the course of the second Turkish siege of Vienna, the church was destroyed by the Turks on 7th July 1683. Although the fathers returned in the same year, the reconstruction or new building of the church was not completed until 1734. In the course of the Josephine church reforms, the order was dissolved around 50 years later (1782). The court war councilor Leopold von Kriegl bought the church and most of the Hermitage buildings on 14th April 1783 for 28'550 guilders. After he initially wanted to turn the church building into a dance hall, he later repaired or rebuilt the church and obtained the elevation of the locality. On 21st December 1783, the re-inauguration took place by the provost of the Klosterneuburg Monastery Floridus.

It served first as a church, later as a parish church for the newly founded village of Josefsdorf. In 1809, it was damaged by Napoleonic troops. Presumably due to the small population, it was hardly used as a result and fell into disrepair over time. Even a renewed consecration in 1852 could not change that. It was not restored until the Resurrectionists took over the church in 1906. In memory of John Sobieski III, who led the relief army against the Turkish besiegers from Kahlenberg in 1683, the church is still looked after by Polish priests, the Resurrectionists. Polish pilgrims also like to visit the church, including Pope John Paul II in September 1983. The northeastern elevation of the Kahlenberg, or the elevation of the Kahlenberg closest to the Danube, where the Chapel of St. Leopold was built in 1693, has since been referred to as Leopoldsberg.

The church is a baroque, single-nave aisleless church. The small side entrance is adorned with a statue of Saint Joseph. The anteroom is entirely dedicated to the historical event of 1683, numerous drawings and pictures commemorate the historical battle. There are numerous baroque paintings in the interior of the church.

The Sobieski Memorial Chapel (formerly 'Guardian Angel Chapel') is a historical memorial and the most valuable part of the church on the Kahlenberg. It is located in the southern part of St. Joseph's Church and adjoins the sacristy. Together with the sacristy, it formed today's 'Kahlenberger Museum', which, however, is not open to the public.

The chapel was designed into the Sobieski Memorial Chapel (museum) by Jan Henryk Rosen, painter and professor at the Lviv Polytechnic in 1929/30, and was consecrated on 28th May 1931 in the presence of Federal president Wilhelm Miklas. 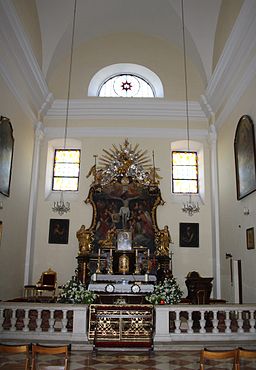 In the center of the high altar rises a sculptural crucifixion group, which dates from the time it was used as a monastery church. On the side walls of the high altar, there is a picture of Saint Jerome at the top right, and a picture of John the Baptist, on the left. Both pictures, works by the Bohemian painter Jan Petr Brandl, are a gift from Count Franz Anton von Sporck. An oil painting behind the crucifixion group, painted by Friedrich Schilcher in 1852, depicts serving angels with the tools of the Passion. Below is the Madonna from Kahlenberg, a copy of the picture of the Most holy name of the Blessed Virgin Mary, which Pope Innocent XI donated to the church after the battle 1683 and is kept in Santissimo Nome di Maria al Foto Traiano. Innocent XI also introduced the feast Most holy name of the Blessed Virgin Mary for 12th September, with which Mary should be thanked for the supposed help in the battle.

Presbytery and side altars

Two other baroque paintings are along the long walls of the presbytery, on the right Saint Leopold, on the left Saint Romuald, the founder of the Camaldolese order. The paintings on the side altars are from the 18th century. Above the left side altar, is a depiction of the Nativity of Jesus, including a modern, naïve icon of Our Lady Ludźmierz (Matka Boska Ludźmierska). The painting on the right side altar shows the baptism of Jesus. In a niche, next to the left side altar, hangs a copy of the miraculous image of the Black Madonna of Czestochowa. 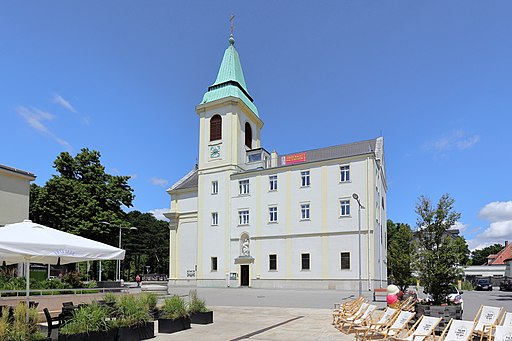 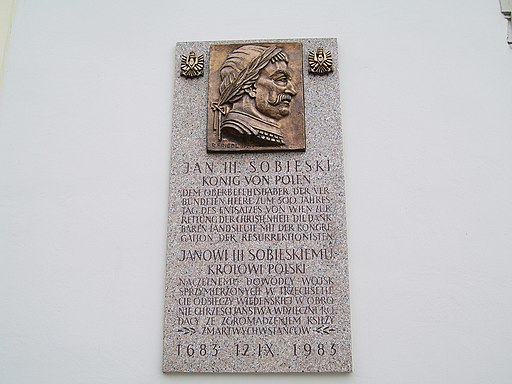