The Jesuit Church is connected inextricably with the old University of Vienna. It has been consecrated in 1631. For 250 years it remained the Church of University.

Viennese people know it till to the present day especially under this name. It is one of the most beautiful rooms in Vienna and one of the best preserved ones.

Emperor Leopold I. has sent 1702 for Andrea Pozzo, the Jesuit brother who was already famous as an architect, sculptor and painter, to Vienna 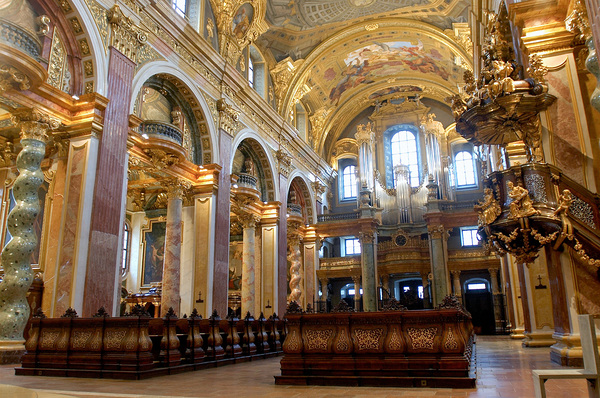 . He has given the high baroque shape, which is until today well preserved, in the inside of the Jesuit Church. The conveyance of the faith by experience with all sins is typical still today for the pastoral care of Jesuits in this church. Andrea Pozzo created a new room in the shell of the old one. Under a painted false dome arised a kind of enclosure with mighty benches. The faith is sitting enthroned victorious at the foot of the painted dome. With flowers in their hands and under fanfaresound angels proclaiming their victory in the foremost vault yoke. It's getting eked out in the rearmost vault yoke of those, who just entered the room. By onslaught of victorious angels the demons are pitching downwards. Both scenes, the Angel's fall and the Angel's glory, have a frame of mock architecture with a view in a shining bright sky.

The pictures of the vault are attended with verses of Psalm 113. God's victory will be celebrated with it, the victory of a God, who is uplifting the weak ones from the dust, is enhancing the poor ones, restoring a disdained woman's reputation. This way both scenes are to be understood, which are taking framing the big illusionistic pictures of the vault between them: Above the gallery at the entrance the worship of the herders, at the beginning of the Presbytery the rest of the Holy Family on their escape to Egypt. These pictures are panel paintings, which are placed directly in the vault by powerful, gilded frames, among richly ornamented surfaces. Both are putting a newborn in the middle, a God, who became weak and small and is redeeming the world on this way. God's victory, the redemption, is celebrated finally in the picture of the high altar and the fresco of the choir vault.

Mary is incorporated physically in the heaven, carried up to the triune God, for getting crowned by him. The magnificent crown forms the upper tail of the high altar. Mary stands for the church, for the humankind. Her victory is the victory of the redeemed humans. This victory is declaimed brightly and glamorous.

Not merely in the pictures, but also in the constructed itself, in the colours, the ornaments, the furnishing. The room is proclaiming the victory in the shine of Gold, in the warmth of its from flesh tones and ocher dominated colours. The treasure of the decoration up to the finest inlays, the colossal order of the architecture, the order of colomns of the side chapels, all is realising a victory, which – and that is now showing – but something quite different from those, which are connected historically with the formation of the church. At that time the victory of the Catholicism and of the house Habsburg towards Protestantism and the Ottomans, the enemies of the empire, have been celebrated. Through time until today the room of this church is celebrating the overcoming of the power of death, the resurrection of the flesh, the victory of the small and poor ones.

Further information about the Jesuit Church can be found here: https://jesuitenkirche-wien.at/