The plague column - a column of honour

Today's reminder to the largest plague epidemic that has ever occurred in Vienna. 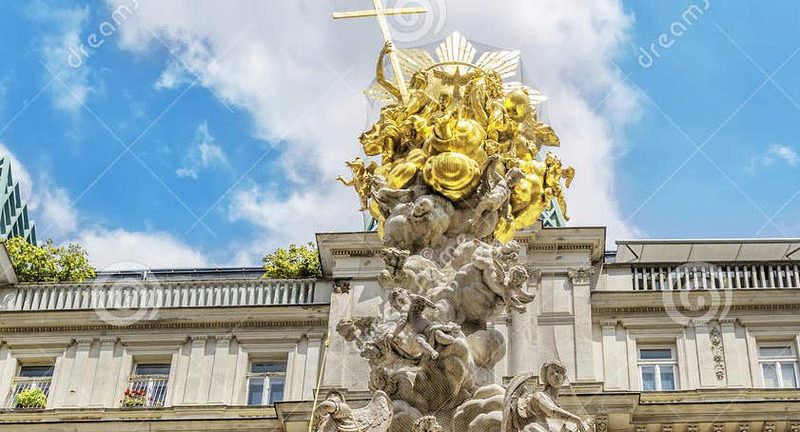 The plague column on the Graben is a today's reminder of the largest plague epidemic that has ever occurred in Vienna: In 1679, this epidemic claimed more thousands of lives than ever before.

The plague column on the Graben is a today's reminder of the largest plague epidemic that has ever occurred in Vienna: In 1679, this epidemic claimed more thousands of lives than ever before.

Especially during the hot summer, the number of sick and dead people rose, so that a deadly horror seized the people in the city. In this state, the citizens of Vienna and a religious brotherhood planned a plague column in order to be able to publicly hold sermons and litanies in honour of the "Holy Trinity" and the "Nine Choirs of Angels" to avert the plague.

For the time being, this "honour column" was supposed to be erected on the cemetery of St. Peter's Church at that time, but was then placed "on the most elegant place in the city called the Graben" between the two wells.

Time was pressing: a plague column made of wood was therefore planned. The  sculptor Johann Frühwirt (1640-1701) was commissioned. In his design, he followed the traditional structure of such memorial columns, in which the representation of the "Most Holy Trinity" was designed as a "mercy seat".

This type of image - in which God the Father holds the crucified Christ in his arms - has been considered a special protection against the plague danger since the Middle Ages. The starting point for this worship of the Holy Trinity, which is so widespread in Austria, is the church on the Sonntagsberg near Waidhofen an der Ybbs in Lower Austria. Frühwirt created the motif "Nine Choirs of Angels" by grouping nine large angels on a pedestal around the Corinthian column.

The wooden predecessor of today's plague column was erected on 27th October 1679 - while the plague was raging in Vienna. Men in penitential clothing, their faces covered by high hoods, dragged the sculptures from the town hall to the square on the Graben. Two days later the solemn inauguration took place by the abbot of the Schottenstift. From then on, this honorary pillar was a focal point for popular piety.

After the plague was extinguished, a big thanksgiving ceremony took place at the pillar on 17th June 1680 - organised by the Lower Austrian provinces - at which the Augustinian Father Abraham a Sancta Clara gave his famous sermon "Danck und Denckzahl".