The Votive Church Vienna „To the Divine Savior“ applies to one of the most signicifant neo-Gothic sacral buildings of the world. 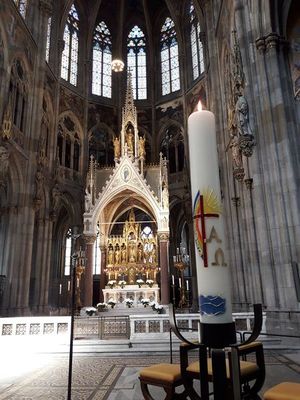 The formation of the „Ring Road Dome“ next to the main building of the Vienna University is associated with the attempted assassination of the young emperor Franz Joseph I. on 18 February 1853 by a tailor's assistant Janos Libenyi.

The church arised as a „complimentary gift“ (Votive gift) for the emperor's rescue. After 23 years construction time the church was consecrated on the 24th April 1879, with the occasion of the silver wedding anniversary of emperor Franz Joseph and empress Elisabeth.

With the construction of a three-naved neo-Gothic basilica in French cathedral style the architect Heinrich Ferstel established one of the most significant buildings of European historicity. With a height of 99m, it is the second tallest church in Vienna.

The Votive Church is a "cosmopolitan house of God", which isn't only the homestead of the parish's community, but also of many other local Catholics in Vienna.

The international community of Vienna is celebrating in the Votive Church as well, with many people from different nations and cultures affiliating themselves. In addition, the church plays an important role for the Latin American community in Vienna as a side altar and a window is dedicated to the Mother of Guadalupe from Mexico.

Further information and service times you can find here: www.votivkirche.at