St. Peter's Church is located in the 1st Viennese district on Petersplatz in the immediate vicinity of the plague column on the "Graben" street. 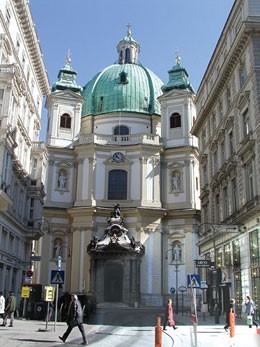 There was already in the late antiquity a church at this point, but none of it remained. In the second half of the fourth century, the former church was built in the vicinity of the Roman military camp Vindobona.

The first eponymous church is said to have been founded by Emperor Charlemagne around 792, but this has not been proven. A church of St. Peter in Vienna is mentioned in a document for the first time in 1137.

Towards the end of the 12th century the church fell under the direction of the Schottenstift. In 1661, the building burned down and was only poorly restored.

The current church building dates from the first-half of the 18th century and was commissioned by the Brotherhood of the Most Holy Trinity.

The church was built from 1703; the plans go back to Gabriele Montani and Johann Lucas of Hildebrandt.

St. Peter's Church was completed in 1722 and was the first domed building in baroque Vienna. In the years 1751-53, a portal porch was built according to the plans of Andrea Altomonte.

More information and the times for services can be found at: www.peterskirche.at