The patron saint of our Cathedral Church is the first martyr of the church, St. Deacon Stephen. He is one of the most prominent figures in the Acts of the Apostles, the book of the New Testament that tells of the transnational work of God and the spread of the Gospel. 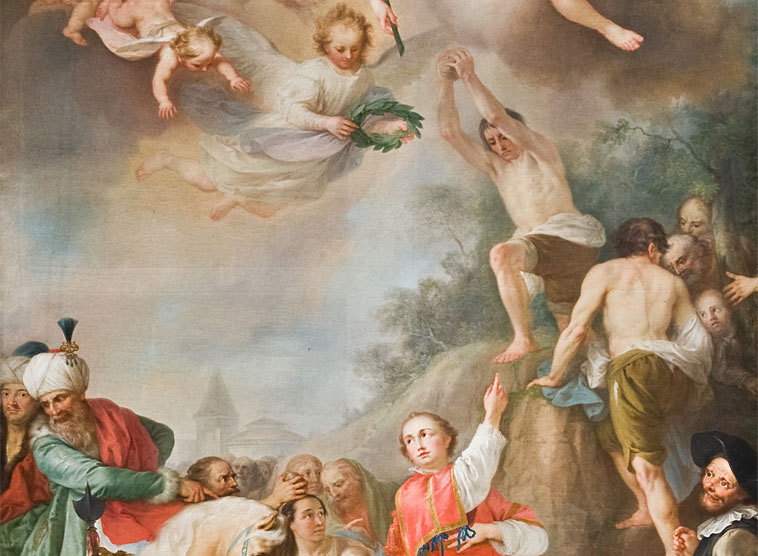 The story about Stephen comprises only two chapters of the Acts of the Apostles and is at the end of the Jerusalem section, which puts the life of the early church under the harmonising motto: 'They were one heart and one soul. Nobody called anything his property because they had everything in common (Acts 4,32)'. Even in the first years the early church had to endure differences and ordeal - to solve one of these conflicts Stephen was chosen together with six other men. He was supposed to take care of the poor, because in the daily distribution of food in Jerusalem the widows from the Greek-speaking Christian communities were disadvantaged. Apparently there was a dispute between the Greek and Aramaic  speaking Christians.

Longest speech in the Acts of Apostles

For the author it was more imporant to describe Stephen as an arguable and a charismatically gifted man instead of a man who served the poor ones. He was 'full of grace and power, did miracles and great signs among the people', as the 6th chapter is telling, before immediately the conflict with some representatives of the Jewish synagogue is being told, which leads to the stoning of Stephen at the end of the 7th chapter.

In between, there is an extensive speech by Stephen before the high council. It is - not by chance - the longest speech in the Acts of Apostles, in which Stephen, with an angelic, transfigured face, relativises the importance of the Jerusalem temple. The sanctuary, once built by the great King Solomon, is beautiful, but Stephen is convinced that God does not live in a man-made place. Like Jesus, Stephen takes a critical stance towards an institution that has become excessively sacred to people, towards a cult that has long since failed to achieve its goal. The guardians of the temple do not like to hear this.

The whole world is God's temple

Unfortunately, Stephen's speech is not included in the liturgical reading order for St. Stephen's Day. Granted, it would be very long. But it would be worth reading, because it summarises and interprets the entire history of Israel in about 50 verses. In the spirit of Jesus, the interpretation of history is: God cannot be reduced to a cult or a place, the whole world is his temple.

Stephen went down in history as the first martyr. The 'Stephen's Day' reading from the Acts of the Apostles tells first of the arrest of St. Stephen and then of the indignant reaction of the audience to his fiery speech. The scene of the stoning follows. These lines are no less interesting than the charismatic words of Stephen. They show through several small details that the first martyr meets the same fate as Jesus: Like Jesus, Stephen has to defend himself before the council, like Jesus he is dragged to the gates of Jerusalem to be killed. But it is even more noticeable that the martyr exclaims in the hour of death 'Lord, receive my spirit!' and that - again parallel to Jesus - he asks the murderers to be forgiven: 'Lord, do not count this sin on them!'

At the end of the cruel scene, the last sentence introduces the next great figure in the book of Acts: Paul. He watches as Stephen is lynched and agrees. A few chapters later he becomes a fierce defender of Jesus' message and - like Stephen and Jesus - a martyr who has to deliver a speech in defence before the council.

Acts: Not just the history of great men

The book of Acts is - as the title suggests - a story of great men. But it is much more than that. The great figures, including Peter and Philip, structure the extensive book, but they are not the centre themselves. The focus of the action is the gospel itself, the good news itself that Jesus spoke of. The whole drama of the Acts of the Apostles aims to underline the good news of the unstoppable and transboundary work of God. So the 28 chapter long book ends with the - probably somewhat idealised - remark about Paul, who in his captivity in Rome 'unhindered and with all boldness' proclaims the kingdom of God and Jesus Christ.