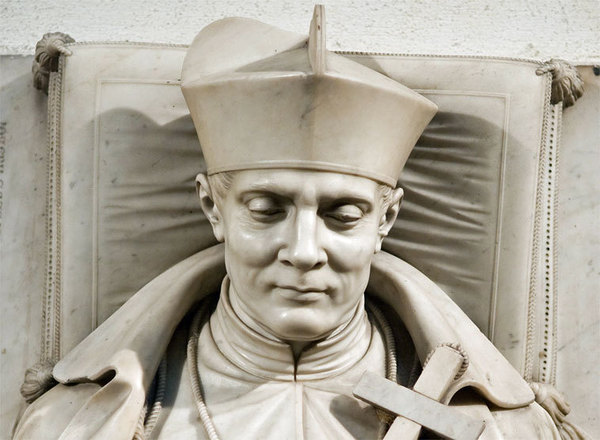 Clement Maria Hofbauer, born on 26th December 1751, baker, priest, preacher, member of the Redemptorist order and city patron of Vienna, is a saint who still gives courage today. Courage to proclaim the faith, for new things and a contagious love for Christ and the people.

The Clement-Maria-Hofbauer-Museum in Vienna is primarily dedicated to his four places of activity: St. Stephen's Cathedral in Vienna, St. Benno in Warsaw, the Minorite Church and St. Ursula in Vienna. It is kept simple, as it would have been in Hofbauer's sense.

Pastoral care is caring for people

He is supposed to have said once: 'Even if you cannot recall the past, you can still redeem it by doubling your goal in doing good.' So he dedicated his life to the individual; always striving, with pastoral care and need to connect with each other. His love for people spanned a wide range. Artists, scholars, but also many simple people could count themselves among his circle of friends, to whom he was an inspiration, stimulation and spiritual focus.

On 29th March 1785 Clement Maria Hofbauer was ordained a priest in Alatri, but his journey there would be marked by turbulence.

As one of twelve children of a Bohemian cattle breeder and a mother of German descent, he was given the name Johannes when he was baptised. He became an acolyte in the local community and so the heartfelt desire to become a priest arose very early on. But he was not allowed to do so for the time being, as his mother could not finance the training for him. Thereupon, Hofbauer decided at the age of 16 to start an apprenticeship as a baker in Znojmo. After completing his apprenticeship, he got a job at the Premonstratensian Monastery of Klosterbruck and attended the convent school there. During this time he went to the Hermitage and made three pilgrimages to Rome.

At the age of 29, he moved to Vienna as a baker. In connection with another pilgrimage to Rome, in 1783, as a hermit, he took the name Clement Maria with the consent of the Bishop of Tivoli, later Pope Pius VII. He could finally begin his theology studies in Vienna. A year later, he made perhaps the most important acquaintance of his life in the person of Thaddäus Hübl, who would remain a friend of his life. With him, he learned of the Redemptorist order, in which the two would enter.

After their ordination, they were sent to Austria to set up a Chapter of the Redemptorists, but here, too, Clement Maria Hofbauer's path could not have had fewer stones: Due to the measures taken by Emperor Joseph II, the two priests were initially unable to implement their plan to found monasteries.

But Clement Maria Hofbauer did not give up. True to his well-known saying 'Take heart, God directs everything!' he and Thaddäus Hübl did not let themselves be dissuaded from their mission. When they were assigned to the parish of St. Benno in Warsaw in 1787, they founded schools for poor children, handicraft schools for girls and an orphanage there. It is clearly evident here that Hofbauer was a man of simple language, but especially of action. In a unique way he links social pastoral care with its proclamation; for which he is now often compared to Pope Francis.

Thaddäus Hübl died of typhus in 1807 and only a year later, the Redemptorists were expelled from Warsaw, because Napoleon suspected them of being sympathisers of the Bourbons. Hofbauer would then return to Vienna. First he was arrested there, but released three days later. He becomes assistant priest of the Minorites and later advanced to the rectorate in St. Ursula.

'The Gospel must be proclaimed anew'

With inventive creativity, he now revived things that seemed long forgotten under Emperor Joseph II: with the help of flowers, incense, candles and works by Mozart, he brought the beauty of the liturgy back to life. In his very own style, he embodied the gospel, the passion and love for the Lord and the people. Fortunately, many of his sermons have survived, as Hofbauer was intensively spied on during this time. He becomes a popular confessor, and all sorts of people gathered, not only in large numbers to his church services, but also in his lodgings. His home becomes a  popular meeting and confessional room for famous and everyday personalities, young people and the poor. Gradually, he brings a new form of Catholicity to the city, namely the awareness that the Catholic is not national, but all-encompassing and above all, full of goodness.

Despite his growing fame, Hofbauer always took time for the poor and provided them personally with bread and soup almost every day. Only one heartfelt wish was to be fulfilled by the Emperor after Hofbauer's death: the approval of the Redemptorist order and the handover of the Church of Mary on the shore.

A saint for today?

On 15th March 1820, Hofbauer's life came to an end through exhaustion. He was then entombed in the Maria Enzersdorf cementery in Lower Austria. Today his remains are in Maria am Gestade. Hofbauer was beatified on 29th January 1888 by Pope Leo XIII. and then finally canonised by Pius X on 20th May 1909.

An annual pilgrimage, on the traces of the stations in his life, commemorates his voice; which still calls us today to human closeness, openness between social classes and the reduction of reservations between peoples.