Mautern on the Danube on 8th January 482: In his monastery Abbot Severin died, the apostle of Noricum. 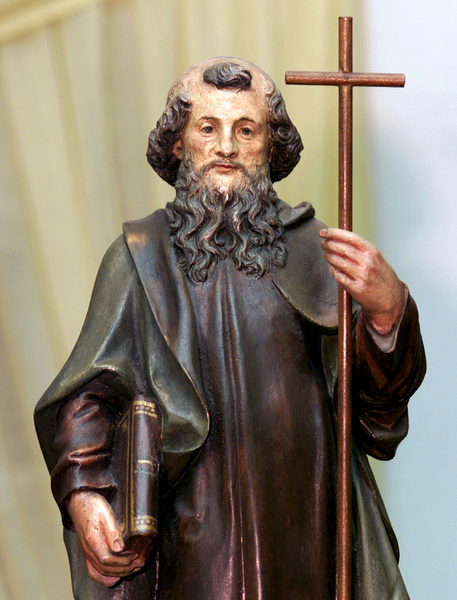 The basin of Vienna in the first half of the fifth century: The violent assaults of the Huns from the East have been borne, Arian-believing Germanic tribes threatening the largely Christian population to the south of the Danube. Exactly at that time, emerged a mysterious, charismatic figure, called Severin, firstly in the area of Klosterneuburg, later in Tulln and finally in Mautern.

We don't know anything about his origin. His name rules him out as a Roman, rather his lifestyle and his sermon indicates him as a monk of the Upper-Egyptian desert.

The early church in the Danube region

In the Roman province Noricum, he discovers a weakened Christian life. Due to soldiers and slaves from the East, there are most likely, since the second century, Christian communities, churches and bishops with their clergy.

However, these early Christian communities are dominated by uncertainty, religious ignorance and understandable fear of the tangible political changes. The monk from the desert develops in this morose situation a remarkable missionary, charitable and political engagement. He is not a cleric though, but as a monk, a rather plain and simple Christian, he is not skimping with criticism on the despondency of his fellow Christians in his sermons. But it is even more important for him to renew Christian life based on Holy Scripture.

He founded monasteries, which exemplify as model communities: how one can counter the corrupt and ineffective Roman trading system with an alternative, through self-sufficiency (e.g. viticulture and fruit growing) and sharing (today it is probably called the sharing economy).

He took the liberty, expressly in the name of the Gospel and not because of the Roman law, to organise effective help for the people plagued by existential need. He was not afraid of encountering personally with the hostile Arian-believing Germanic tribes (supporter of a widely spread false doctrine of that time, which denied the true deity of Christ) north of the Danube, in order to defuse the tense security situation by negotiations.

In all of this, his biographer, the scholar Eugippius describes him as a man of prayer, who dedicated his life to Holy Scripture, according to the Sacred Tradition. He passed away on 8th January 482, surrounded with his monks in the monastery Mautern on the Danube. His last words were, as Eugippius recorded, the last verse from the book of Psalms: 'All that breathes, praise the Lord'!

By purely human standards, the life work of Severin had no lasting success. The Christians were displaced almost entirely, after his death, from the Danube region. The monks of Severin then would avoid the Germanics. They carried the remains of their founder to Italy. Severin's grave is today situated in the southern Italian town of Frattamaggiore.

The 112th Psalm says that the Righteous remain 'forever in memory'. Two hundred years after the fall of Christianity in the Danube region, monks are returned, this time from Ireland and Great Britain and continued successfully what Severin had started. The abbey Göttweig, situated only a few kilometres above Mautern, continues the work of Severin to this day like many other places of spiritual life.